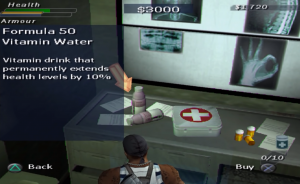 Similarly, you were able to go into its closet and find G-unit clothing. You saw G-Unit clothing prominently displayed throughout the game. You also saw G-Unit sneakers displayed in the game. And you also saw the artists he had signed on his G-Unit label as characters in the video game.